The Libero, the sweeper, the original ball playing defender. The role required a player to be the last man behind the defensive line, adding both extra security as well as a having the ability to start attacking play from the back. They need to be able to read the game well, be calm and confident enough with the ball at their feet to carry it forward. They have a free role in defence, as they have no opposite number to man mark but with the extra freedom come extra responsibility. The role is unique, in that it is the only position that no longer exists and has been resigned to football folklore. Unlike full-backs and centre halves, these have changed in not much more than name, now generally referred to as left/right and centre backs, the job description remains the same.

The Sweeper, often called Libero, from the Italian “Battitore Libero” meaning “Free Hitter”, describes the freedom from not having a man to mark and being able to carry the ball from the back rather than play it long over the top to the attackers. Although the name is Italian, that wasn’t the nation of origin, It was the Austrian Coach; Karl Rappan who first used the system on a regular basis during the 1930s. Rappan tactics were an adjustment to the popular “WM” system that was spreading throughout football at the time, today we might call it a 3-2-2-3. It spawned out of trying to find a way to make the WM, less dependant on the talent of an individual and more on rewards from collective contribution and working for the team, this was ideal at the time, as most clubs would have only had existed for around 20 to 30 years therefore having an fairly amateur standard of player. Rappan had success with the system and named the position of his sweeper; “Verouller” which is French for, bolt, as in lock and bolt – to bolt shut, rather than lightning bolt. The Verouller is granddad of the Libero and the system the grandfather to the Italian Catenaccio.

The Cantenaccio, was introduced in Italy during the 1950s, as with Rappin’s team, the role was to have a man behind the defensive line sweeping up anything that pasted the last line of defence but also with the ability to expose oppositions and start a counter attack, they would start behind the last line of defence and then surge forward to join the attack. In the Late 1940s Nereo Rocco would employ a “Bolt/Libero”, first shown in 1947 whist at Triestina with a 1-3-3-3 formation, on occasion switching to a 1-4-4-1 or 1-4-3-2. The sweeper’s role was to recover loose balls, nullify and/ or double-mark the opposition when necessary as well as the important innovation to counter-attack originally based on long passes from the defence. In 1953 Rocco took over as manager at Padova in Serie B, and were promoted to Serie A within 2 seasons. The Serie A period of Rocco’s Padova is still remembered as the team’s most successful in their history, despite having a small team, they were able to finish third in the league during the 1957–58 season. In 1961, Rocco was appointed as new A.C. Milan coach after two successful seasons he left to join Torino and the when they had there best spell since The Superga air disaster. in 1967 Rocco returned to Milan, going on to win a host of trophies.

Helen Herrera’s interpretation whilst at Internazionale from 1960 to1968, employed four defenders, man marking the opposition strikers and wide men, as well as a Libero behind. The emphasis on the Libero was said to have started the rise of Italian clubs throughout Europe. Although considered a defensive formation, Herrera himself said that the system was more attacking, “The problem is that most of the people who copied me, copied me wrongly, They forgot to include the attacking principles that my Catenaccio included. I had Picchi as a sweeper, yes, but I also had Facchetti, the first full back to score as many goals as a forward”, these were mainly due to Herrera’s innovative use of attacking, overlapping full backs. They could also rely on deep-lying playmaker Luis Suárez; outstanding work-rate, technical skills, vision and passing range; Suarez would launch quick attacks with accurate long balls out to the on-running full-backs.

Rinus Michels, a pioneer of “total football”, exposed weaknesses in Herrera’s Catenaccio. By the 1970s the dutch were developing a team where no player is fixed in his positions typical role; anyone could decide to leave his “designated area” and take up the duties of an attacker, a midfielder or a defender, depending on the play. Man-marking was pretty useless again this system as your centre backs could easily be dragged out of position leaving a massive gap for any of the other team 10 outfield players to attack, so coaches then began to create a new tactical system that mixed man-marking with zonal defence. In 1972, Michels’ Ajax defeated Inter 2–0 in the European Cup final and Dutch newspapers announced the “destruction of Catenaccio”.

The position is probably most commonly associated with Franz Beckenbauer; in 1971, Beckenbauer became captain of the national team and he led West Germany to victory at the European Championship at Euro 1972 and the World Cup in 1974. He not only roamed around his own area sweeping up anything that slipped past his team mates, looking for long passes out wide or up to the strikers but also being the focal point of attack himself. During the 439 games he started for Bayern Munich he scored 64 goals, finishing his career with 108 goals. 7th highest on a list of all time goal scoring defenders, only beaten by; Roberto Carlos, Steve Bruce, Graham Alexander, Fernando Hierro, Daniel Passarella and Ronald Koeman.

By the 1980s, for various reasons, the Libero was dying out. AC Milan under Arrigo Sacchi dropped the system and adopted a 4-4-2 with arguably all 11 players having the features of a Libero; calm, excellent vision, confidence, the ability to become the play maker at any given moment. There were also other flaws spotted with the role as tactical awareness and individual skills evolved, there was a case that the development of the offside rule turns the Libero into a liability; if the attacking team beats the last line of defence, in numbers, you could be left with a 3 on 1. Furthermore having a spare man behind the defence left a space for an unmarked player in the centre of the pitch allowing the team with the Libero to be over run in midfield, this effectively ended the attacking element of the Libero. Zonal marking is another example of what makes the Libero a disadvantage, rather than an advantage. A team with a Libero can not play zonal marking as it would require the opposition striker to play most of the game on the boarder of on/ offside, if that striker is particularly fast, the long ball can completely by pass the whole defending team and lead to a direct 1 on 1 with the goalkeeper. Some argue that the modern game is high pressing and more intense, as team set up to win a lost ball back with 3-5 seconds, this added pressure on the Libero requires them to think 2/3 moves ahead to ensure the last man doesn’t lose the ball.

The influence of the Libero on todays game is still clear, mainly in two particular roles; the central defender of a 3-5-2 or a 5-3-2 (depending on whether you have the ball or not) or the “sweeper- keeper”. In 2004 Otto Rehhagel whilst managing Greece at the European Championships used Traianos Dellas as a sweeper, conceding 4 goals in the group stages and none in any knockout stage match or the final becoming shock champions. Juventus use Leonardo Bonucci to start play from the back as AS Roma have used Daniele De Rossi in a similar role on several occasions, the Premier League has probably one of the most “Libero type players” in David Luiz, defensive duties are not the strongest part of his game, but having the ball at the back and starting the play is why he has earned a combined transfer fee of around €105 million in his last 3 transfers. In some ways the position has moved from behind the back line to just in front of it, as the position of holding/ deep-lying midfielder becomes ever more popular. Claude Makelele doing the job of breaking down play so well, they named the roll after him, the attacking equivalent would be someone like; Xavi, Pirlo or Schweinsteiger, that have the ability and vision to have the ball in the own half and create scoring opportunities at the other end. For those who like to keep their libero behind the back four, we have the sweeper keeper. Debatably first employed by the Hungarian team of the 1950 with Gyula Grosics, now most evident at Bayern Munich and the Germany national team with Manuel Neuer with excellent ball control, timing and passing with his feet, considered more than just a goalkeeper, but as a footballer. The role requires the ability to engage the attacking players with a range of passing but also to intercept the ball, close down attackers even if that’s outside of the 18 yard box. usual found around the “D” of the area and ready to push up to the half way line, ready to play long, diagonally balls up field or precise short passing. Some consider the reliance of a sweeper keeper desperate as previously, any involvement from the keeper in the attack was sending them up for a corner in the last 5 minutes of a game.

Today, they system that closest resembles the methodology of Rocco, Herrera, et al is probably Pep Guardiola’s, Whether at Barcelona, Bayern or Manchester City, he plays a high keeper, to act as the 11th outfield player, ball playing centre backs that can start the attack from very deep, hard working, functional midfielders that are comfortable on the ball and in a number of positions, from sitting to attacking, interchangeable wide men and a clinical finisher that still had a duty to drop slightly and create. The Freedom of the Libero can now be given to any player, and can change at any time during a game, the evolution of the footballers abilities, training facilities and the changing laws of the game have left the classic sweeper redundant.

Karl Rappan’s deployment of a Verouller with the Swiss National Team 1933. 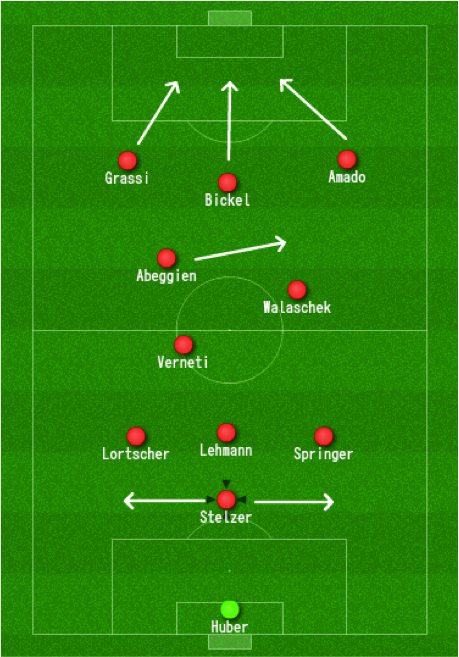 Helen Herrera advances the role with Picchi as Libero spraying passes wide to Facchetti as attacking full back. 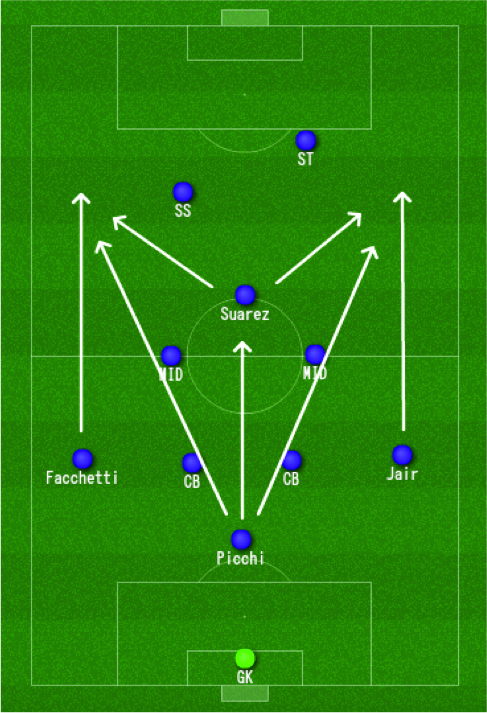 Franz Beckenbauer enjoys a free role at the back of Germany’s World Cup Winning 11. 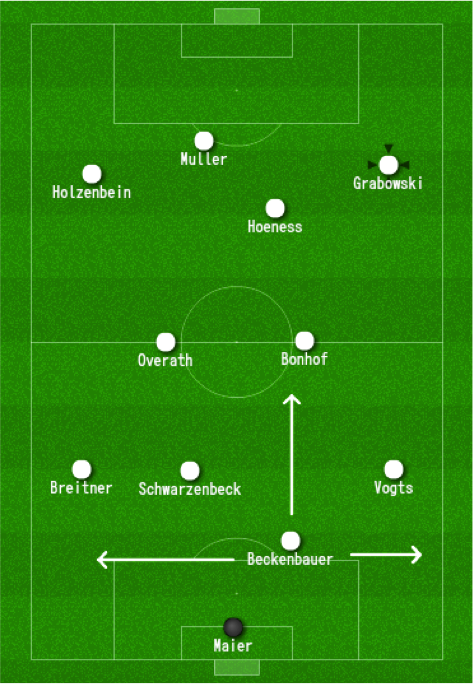 Arrigo Sacchi drops the Libero and develops on from Rinus Michels ‘Total Football’. 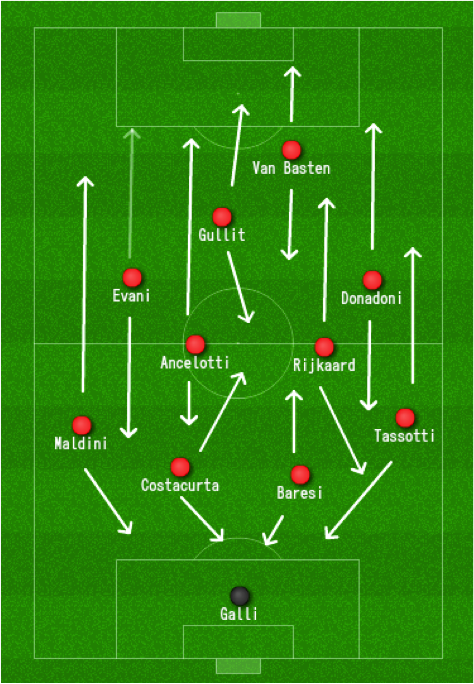 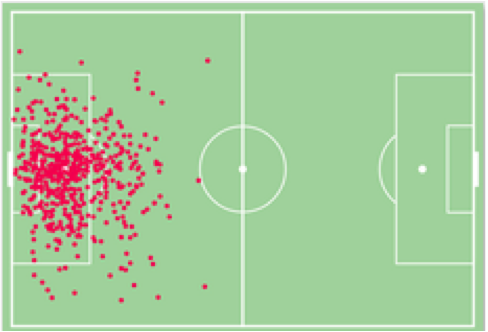 By Chris Nichols, a football obsessive, researcher and writer, presenting tales from footballing antiquity, urging the underdog and hailing the perpetuity of the beautiful game. Follow Chris on Twitter.