So that’s it, the season’s over and what a season it’s been. Fortunately, the excitement doesn’t end here for the summer. Fans up and down the Continent can now cast their eyes towards France and the prospect of this year’s European Championships.

We’ve all heard of the Wayne Rooney’s, Paul Pogba’s and Thomas Müller’s of this world and we fully expect them to light up stadiums across the land from the Parc Des Princes to the Stade De France but, could we see any emerging stars take the stage by storm and stake their right to be mentioned in the same sentence as these icons?

In 2014 a young, slightly built Colombian boy came to Brazil with a reputation in both Portuguese and French league football, a nation’s hopes on his shoulders after an injury to star countryman Radamel Falcao. Two years on and James Rodríguez is a £63 million Galactico after leading his country to a World Cup quarter-final whilst picking up the tournaments golden boot.

So will Euro 2016 be the summer the new faces of elite European football show themselves? Below I’ve put together a team of the best 11 players from 11 different countries you’ve probably never seen play. Made up of future stars and prime aged players with a sprinkling of veteran experience, these are my lads to look out for. Enjoy!

Known for his exquisite shot-stopping ability, Akinfeev has been the last line of defence for CSKA since 2003. Despite being touted away numerous times, this Moscow-born lad has stayed faithful racking up over 300 appearances for his club. A local hero and National gem, watch out for him doing his utmost to keep Kane and co out in the group stages.

The latest product on Belgium’s seemingly never-ending conveyor belt of talent, Denyer could be Pep’s next project at Man City. Having spent the last 2 years on loan at Celtic and Galatasaray respectively, the 6ft 1 defender has all the attributes to eventually dethrone Vincent Kompany for both club and country.

All eyes will be on Bayern star Alaba for Austria this summer but Dragovic can take a lot of credit for his countries stern defence. Currently plying his trade in Ukraine, it is only a matter of time before the former Basel man gets his move to one of Europe’s big leagues. Expect him to impress.

Courted by Liverpool for the last few months, Hector goes against the modern day full-back in putting defending first. After yet another impressive Bundasliga season he has earned his right to be Germany’s first choice left back playing alongside Hummels and Boateng at the back.

Having started his career in midfield, Florenzi has shown his versatility by proving an equally viable option at right back. One moment of magic springs to mind from this season from the Rome-born man when he produced one of the greatest Champions League goals ever, scoring from the halfway line against Barcelona.

At 31, Inan has been playing in the Turkish league since 2002 clocking up 50 caps for the country. Now a veteran, the loyal midfielder is a pass master and will dictate the tempo of games this summer whilst stars such as Arda Turan shine. Think of him as the Turkish Pirlo (or Joe Allen!)

Perhaps the most exciting of the lot. Having just won the Premeria Liga with Benfica, Sanches has bought himself a one-way ticket to Munich with a £27 million price tag on his head. The combative, box to box midfielder is a joy to watch and has one hell of a future ahead of him. Remember the name.

With a similar playing style to Cristiano Ronaldo, defenders beware. Having made over 200 appearances for his club, the second Kyiv player on this list is a pacey winger with bags of tricks and a fearsome shot. Standing at over 6ft, expect the Polish, Northern Irish and even German defences to be doing their homework on this boy before the Euros.

With 12 goals and 7 assists this season it really has been a breakout year for the former Barcelona winger. The biggest compliment of all is perhaps the fact he is wanted back by his former employers after managing to break his way into an elite Spanish squad for this summers tournament.

With the limelight firmly on Lewandowski, you’d be very foolish to assume keeping him quiet will stop Poland’s flow of goals. Milik netted 21 in the Eredivise this season and at 22, already has 10 in 24 caps for his country. A tall, powerful presence in the box coupled with ice cold finishing. Don’t expect him to be at Dutch runners-up Ajax for much longer.

Another boy with a big future in the game. The fact Basel rejected a £21 million bid from Wolfsburg for the teenager in January shows just how highly he’s rated. Built in the same mold as the likes of Drogba and Lukaku with a playing style similar to Balotelli, it seems this lad is destined for great things. Providing he stays on the right track, watch out for this kid in the years to come.

So there you have it, here’s my final XI of Euro 2016’s best players you’ve never seen. Do you agree with me? Comment below! 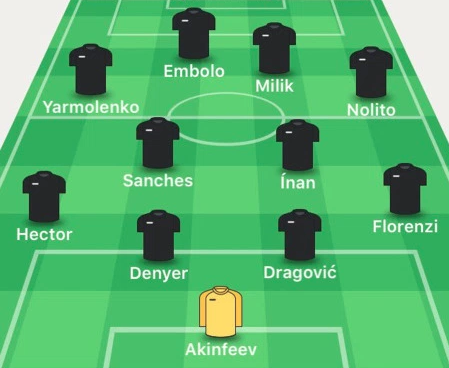