I’ve spent the last couple of nights watching some retro football documentaries, “Gazza: The Real Me,” “Gazza: The Italian Diaries” and “Chris Waddle – The French Way”. Watching these absolutely blindingly talented players made me wonder.

No disrespect to the late Sir Bobby Robson as he was a class man and manager, and we did get to the semi-finals with him by not playing a flat 4-4-2 (eventually), but we really should have got so much more out of that squad that came together in the late 1980’s/early 1990’s era.

People have lambasted English players for years for not being technically good enough, but look at the team below playing in a 4-2-3-1 shape and tell me that some of the finest technicians we have ever produced are not in that side. 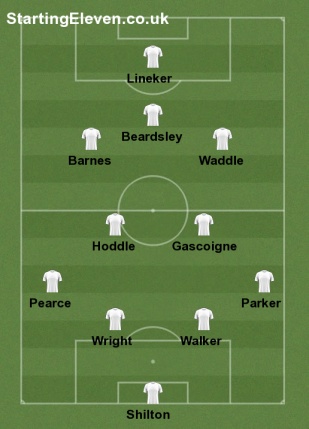 English players have also been criticised for not getting enough experience abroad, but Walker, Gascoigne, Hoddle, Waddle and Lineker all played football away from England and excelled.

If only they had been allowed to play for England like they did for their club – Wright was an excellent ball-playing-defender and Walker was rapid. Pearce was one of the world’s best left backs in his day and Parker was massively under-rated as a player. Shilton won the European Cup, and despite his inability to ever save a penalty he was one of the world’s finest custodians.

Imagine Hoddle playing the Pirlo role now, with Gascoigne as a roaming playmaker. Waddle at Marseille was absolutely incredible, for me (controversially) a better dribbler than George Best. Play him on the right wing with a license to drift inside and watch him go. Barnes, my word what a player, he had the lot. Play him as a classic inside forward and again, sit back and watch him destroy people. Beardsley was a little genius, and his partnership with Lineker defied the English tradition of having a big lad and a quick lad up top. Beardsley was so clever at finding Lineker’s runs, something he would later repeat with Andy Cole at Newcastle. Finally, Lineker, the poacher extraordinaire.

In my opinion, we have not had a side that comes close to that and, to be honest, we didn’t get the best out of that side. Don’t forget, on the bench we have Terry Butcher, David Platt, David Seaman and Bryan Robson and you cannot rely deny their quality.

I know it is a lot more complex than that, but they say we wasted the golden generation of Beckham et al.  I’m sorry, but they had nothing on this side.