They say the best things come to those who wait. Well Arsenal fans must have been getting pretty tired of waiting before their FA Cup triumph last May. Since Arsene Wenger took charge in 1996 his team boasts 3 Premier League trophies and 5 FA Cups, the only issue being 7 of these 8 major trophies were won 9 seasons ago. That’s a long time to wait for an 8th for a side who were at the forefront of success until 2005.

Many factors can be attributed to the Gunners’ drought but the main reason seems to be the lack of investment in the clubs first team along with selling their best players. Joked about being Manchester City’s ‘feeder team’ Arsenal fans have seen a host of players join City, amongst other clubs. Some sales have been understandable (Fabregas returning to his boyhood club Barcelona) and others perplexing and frustrating (Van Persie to Manchester United).

The lack of money spent is mainly down to paying off the debt for the construction of the very impressive Emirates Stadium. Now that it appears that has been paid off Arsenal look set to spend and challenge for major honours once again and this can be seen from the £42.5 million spent on bringing Mesut Ozil to the club on last summers deadline day.

So far the Gunners have spent £62 million on players this summer recruiting the likes of Alexis Sanchez, Mathieu Debucy, David Ospina and most recently Calum Chambers. Perhaps more importantly, however, is that they have not sold any of their key assets with Sagna being the most high profile departure.

From being a team that looked destined for 4th year in, year out it now looks as though supporters can take genuine belief that their side can put together a real challenge for silverware. Of course it won’t be easy – Chelsea have strengthened significantly, Manchester United will no doubt improve under new manager Louis van Gaal, Liverpool may have lost Luis Suarez but they’ve invested heavily in their squad and, of course, the current champions Manchester City are the team to beat.

Looking a bit further into their signings it’s clear Alexis Sanchez is the name that has fans licking their lips. The Chilean winger is the only one so far who can be argued about being in the ‘world class’ bracket and will no doubt excite fans with his pacey, direct approach. Debucy is a more than suitable replacement for Sagna finishing with the highest rating on WhoScored for a Premier League right back last season. The other two will be seen more as cover players however Chambers will certainly be viewed as a future starter. 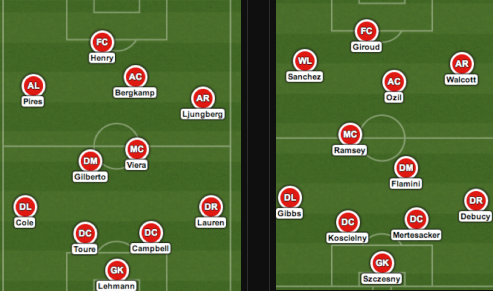 Above is a comparison between the 2004 ‘invincible’ Premiership winning side and the possible line-up for the coming season. Looking at it, two positions that jump out at me are the striker and defensive midfield roles. The gulf in class between Henry and Giroud is laughable and despite Ramsey coming into form, an upgrade of a Flamini-esque player is needed. Balotelli and Khedira have both been linked to these positions respectively, yet both now seem unlikely. With the Remy deal to Liverpool now off I would love to see Wenger bring him in. If another striker is added along with the likes of a Schneiderlin or Sporting Lisbon’s William Carvalho, Arsenal, for me, are then a lot closer to the quality seen from their ’04 side and become my favourites to lift the Premier League.