It happens in the run up to every major tournament, questions are asked, rumours are spread and opinions are vented – just who should be on the plane representing England at the World Cup in what promises to be an amazing tournament in Brazil?

About a month before all the football starts the squad is named and thoughts move on to who should actually be starting the first match.

Speculation has intensified in recent weeks as injuries, form (or a lack of it) and fitness all comes to the forefront of the public eye during various warm-up friendlies.

It is clear that Roy Hodgson has done his best to break the rigid English ‘two lines of four’ system and stereotype. He has experimented with 4-2-3-1 and 4-3-3 in qualification over the last 18 months.

Hodgson has a few options; he can give the kids a chance and plunge his faith in the likes of Raheem Sterling and Ross Barkley, something admirable but comprehensively naïve. If he loses, then the accusations will come that he has put too much pressure on such young talented shoulders.

He could be pragmatic and utilise Milner, Welbeck and other hard-working yet less creative players yet then if he loses he will be hung out to dry in the press for not playing the likes of Barkley and Sterling and being too defensive.

A fine line needs to be trodden so that there is a mix of hard-working players who can be responsible in defence and creative flair players who can open up the opposition and actually win games for England.

In Group D England come up against Italy who are favourites to win the group, Uruguay who pose a strong attack and Costa Rica who can play with freedom and no pressure. Because of the make-up of the group and their different threats I would like to see Roy Hogdson tackle the matches in very different ways.

In Manaus on the 14th June in the group opener against Italy I would like to see Roy deploy a strong, hard-working outfit with a lot energy because the Italians will dominate possession, be certain of that. With three of Pirlo, Montolivo, Marchisio, De Rossi and Verratti playing in midfield we will have to press them relentlessly or face another embarrassing one sided affair like the one that knocked us out of Euro 2012.

My ideal line-up for this game would be: 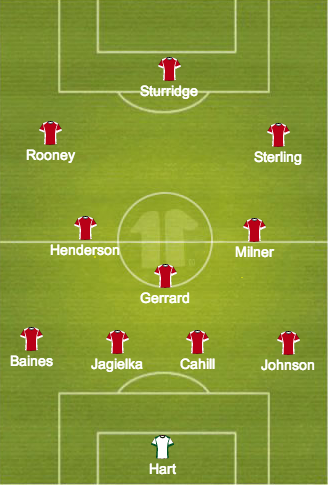 This team would be ideal for the game against the Italians we have people in the middle to not get over-ran yet plenty of legs in the final third because either Milner or Rooney would need to be tasked with the role of picking up and pressing Pirlo for 90 minutes.

If we do not assign somebody to do this then he will drop deep within his half, walk around and run the game without breaking a sweat, remember the game at the Euros? On the face of it this team looks fairly defensive, yet with that front three it isn’t hard to see England scoring a goal against an Italy team with no wins in their last seven games since qualification. A point would be a fantastic result to set us up for the next two games.

Planning a team for the second game of the group is tricky because we do not know who is going to be injured, suspended or in great form and warrant a place after their first game. But as of today, a team and slight change in formation like this would, in my opinion, be perfect for the Uruguay game: 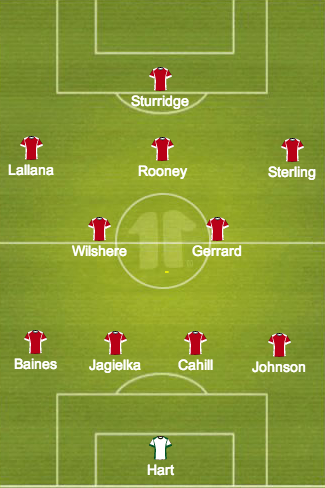 This is a team that can beat Uruguay – it is as simple as that. Even with the attacking prowess Uruguay possess with Cavani, Suarez and Forlan, their team from 1 to 11 is not as good as ours. We have a better keeper, better defence and better midfield and we have to make that count.

Beyond the second match anything could happen because of the amount of variables involved in any major tournament, I would just hope that everyone keeps the faith with the manager and Chris Smalling doesn’t somehow get in the team.