Earlier in the week we had a gander at Omid Djalili’s World Cup song ‘We Still Believe’ featuring the likes of Bill Bailey, Ray Winstone, John Bishop and Jack Dee, amongst others. Judging by the general reaction, which was largely negative, Omid Djalili’s attempt is forgettable, like so many are. 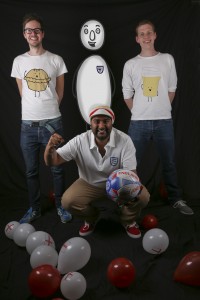 Thankfully though, we’ve discovered a new World Cup song doing the rounds and feel it deserves a tip of the hat. Muddy Boots’ ‘England’s Year’ is witty, catchy and arguably most important of all, original. The video isn’t half bad either. Not only is the artwork superb but it’s a funny watch.

Created in just 6 weeks with no budget and recorded in the bedroom of an East London council block, the idea came about after aspiring music producer and football fan Joe McGairl decided that the England National Team needed a new anthem to unite the nation and cheer on the boys in Brazil.

Fed up with the boring and uninspiring England songs already out there, Joe started writing some music and quickly got in touch with two good friends – vocal talent Harleen Bahra and animation whizz Nick Murray Willis. The trio got together, penned the lyrics in an afternoon, and ‘England’s Year’ was born.