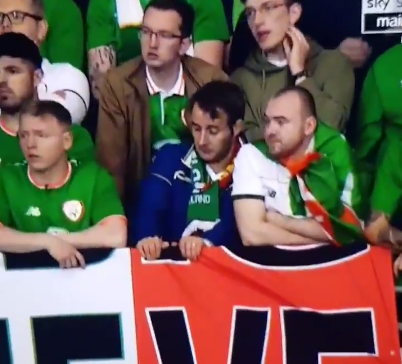 Ireland beat Wales 1-0 to secure a World Cup play-off spot and deny the Welsh a chance of playing in the prestigious tournament after James McClean’s 57th-minute winner ensured the Irish finished second in Group D and increased their chances of an appearance in Russia.

Ireland fans undoubtedly celebrated their team’s remarkable victory with a few shandies through the night, although judging by this Irish fan struggling to stand up and stay awake during the gripping encounter, he was probably in bed or passed out on a bench in Cardiff somewhere following the full-time whistle.

Still, at least he can say he was there, although chances are he probably doesn’t remember much of the game!

This man is doing his country proud #COYBIG #WALIRL pic.twitter.com/XPHhAKPNYs