With the summer transfer window fast approaching, managers around the world will already be looking to add to their squad and look for any potential bargains that might be out there. There are a number of highly rated players available for nothing. Here’s an XI of free transfers I decided to put together:

The Argentinian number one has been struggling for game time at Sampdoria, despite impressing during the World Cup in Brazil, most notably in the semi-final against the Netherlands where he saved two penalties to send Louis van Gaal’s side packing. Could prove to be an astute signing for plenty of sides in Europe.

One of Europe’s best right backs even at the age of 31. Twice a Champions League winner and Brazil caps in abundance, Alves will provide world class performances on a consistent basis. Interest must be high.

Ranocchia has been attracting interest from big names across Europe, most notably Manchester United. In the last 12 months the Italian has put in a series of impressive performances. With central defenders in high demand, Ranocchia’s future will be one to keep an eye on this summer.

Vlaar impressed massively in Brazil as part of Holland’s three-man back line and many reports linked him to Manchester United and a reunion with his former national team boss Louis van Gaal. The Dutchman has been impressive for Villa in the last two years, however has struggled this season due to injuries. Clubs will still be circling, though.

Khedira is one of the best holding midfielders in the world, so it seems strange that Real Madrid are willing to let the Germans contract run out this summer. Khedira has struggled with injury problems of late but if kept fit his talent will be key to potential suitors. PSG, Arsenal, Bayern Munich and Chelsea have all been linked with the 28 year-old. Personally, I wouldn’t be surprised if that list is, in truth, longer.

De Jong was another Dutchman who impressed in Brazil and has been linked heavily with Manchester United in the past few months, obviously down to his Holland connection with Louis van Gaal. It wouldn’t be a surprise to see him at Old Trafford. The 30 year-old already has a Premier League medal from his time at Manchester City and would be a massive asset to any side.

The Ukrainian put in an impressive display against Everton during this season’s Europa League and showed why pundits and journalists are excited about his potential. Liverpool failed in an attempt to sign him last season as they couldn’t agree a fee, however, being available on a Bosman this summer means he could well end up at Anfield. Liverpool won’t be the only club interested though.

If there is someone in football who works as hard as James Milner then I’m yet to be notified of him. Milner is very consistent and versatile. The Englishman can play in central midfield, out wide, up top and he has also appeared at right-back in his time. Milner’s versatility will surely appeal to plenty of managers around Europe.

There were calls for Ings to get an England call-up in Hodgon’s latest squad and with his goalscoring ability then why not? At the age of 22, Ings is still a youngster who has plenty of time ahead of him. It looks likely he’ll be leaving the Clarets this summer regardless of whether they’re a Premier League side or not. Real Sociedad manager David Moyes is an admirer of Ings, as well as Liverpool manager Brendan Rodgers. He would be a fantastic addition to any club looking for a regular goalscorer.

The Frenchman has been in red-hot goalscoring form this season and has been key to Marcelo Bielsa’s side. His agent has insisted Gignac will wait for a ‘clear signal’ from Marseille before he decides his future. Currently only Lyon’s Lacazette has scored more goals in Ligue 1 this campaign. West Brom and Newcastle are just a few of the clubs battling for his signature this summer, according to reports.

Adebayor is certainly an enigma. With the managers confidence he can be fantastic, however, as shown throughout his career he can also be a problem. There will be plenty of suitors trying to secure his signature as he’s relatively proven and can cause problems at any level on his day. Although he comes with an attitude and negative press he has played for Europe’s elite including; Arsenal, Manchester City and Real Madrid. It will certainly be intriguing to see where the Togo international ends up. 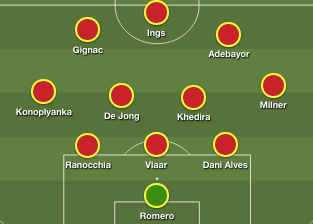