To describe the difference in Liverpool’s performances now, compared to the ones that had left fans and pundits drooling just over five months ago as a “shock” would be an absolute understatement. This is something that even a footballing bystander, somebody who would enjoy a game if they happened to find some spare time coinciding with a match, but not one with an emotional connection to the game would be able to point out. However, when discussing Liverpool currently, one must pay homage to the stark contrast between this season and last, and the absolute peculiarity of the situation. A team once revered for its explosive starts and attacking incisiveness now finds itself sluggish out of the blocks and bereft of ideas in the final third. This, coupled with unconvincing displays have been the story of Liverpool’s season thus far, and fans of the Merseyside club could only really be satisfied with one of their team’s performances up to now. This Sunday at Loftus Road was no different, with the Reds picking up a fortuitous three points against a dogged QPR outfit.

As aforementioned, Liverpool were lethargic out of the blocks and should have found themselves two or three down by the half time whistle. Comparisons may be drawn with the trip to Upton Park, where West Ham, unlike their fellow Londoners, were able to capitalize on the sluggishness of the Reds and put a couple of goals in before their opponents even got into their stride. Were it not for the woodwork or outstanding shot-stopping from under fire keeper, Simon Mignolet, Liverpool fans would have been left seething at another failed opportunity to put points on the board. Defensive shortcomings have been a feature of Liverpool’s play for the last twelve months and it is a source of extreme frustration for myself and many others, that this problem has not been solved despite serious change of personnel.  Both of QPR’s goals were a result of shoddy defending of balls into the box, the first instance being Jose Enrique getting on the wrong side of Eduardo Vargas, allowing the Chilean to convert after Dejan Lovren’s pathetic miscued clearance. The second goal too was a combination of blunders, with the Reds failing to pressurize the man on the near post and unable to clear the ball off the line. Luckily for Liverpool, equally putrid defensive work at the other end saw their blushes spared and handed them an undeserved victory.

Next on the agenda for Brendan Rodgers’ troops is a daunting clash with European champions, Real Madrid- a match that has been diarized by Liverpool fans the world over since the group stage draw. Los Blancos find themselves in fine fettle leading up to the clash at Anfield, having demolished Levante 5-0 at the weekend. Below is my preferred starting eleven for the match against Ancelotti’s Madrid. 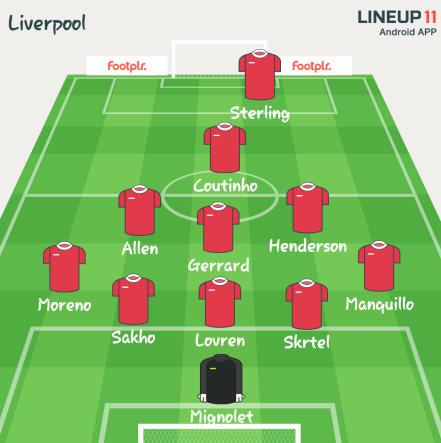 If Liverpool are to get anything at all out of this clash with Real, their game plan will have to be a counter attacking one. If one takes a look at the world class attackers donning the famous white of Real, it would become clear to one as to which side would be enjoying the lion share of possession as well as who would create more chances. It would be something of extreme naivety for Liverpool to think that they could “out football” Real Madrid, and I have chosen players who would be able to fit the counter attacking system seamlessly. I have chosen to go with a back five, simply to crowd out the likes of James Rodriguez, Cristiano Ronaldo and Karim Benzema, as allowing players of this caliber any space at all could have disastrous consequences. Liverpool must ensure that they maintain their defensive line at all times, and stay tight to the Real Madrid attackers, not allowing them too much time on the ball or space to turn into. Joe Allen and Jordan Henderson will have to press relentlessly, as we know they’re more than capable of doing, to force the likes of Toni Kroos and Luka Modric to rush their passes a little, something which would definitely stifle Real Madrid’s forward play. A particular problem that I could envisage with playing a back five, however, is that Mamadou Sakho and Dejan Lovren are very aggressive, front footed players who like to push the defensive line forward. However, Martin Skrtel is the opposite of this, the Slovakian prefers holding his ground and is not as quick to advance. This could create pockets of space for Real Madrid’s forwards and facilitate them in staying onside and subsequently, running on to passes. For Liverpool to curtail Madrid’s attacking prowess, discipline and communication between the three centre halves must be impeccable. If Liverpool are to muster anything at all from this tie, they must overcome their defensive woes- definitely a tall order given their laughable form up to now.

The reason I have opted to omit Mario Balotelli from the starting eleven is that the Italian is notorious for holding onto the ball too long and allowing the opposition defence to settle and get back into shape, thwarting any possible attack. This coupled with his complete lack of incisive movement, compared to the man I’ve replaced him with, would not be conducive to Liverpool’s inevitable counter-attacking game plan.  Coutinho and Sterling have an almost telepathic understanding, as we saw against QPR and the former definitely has the vision to release Sterling into the gaps left by Madrid’s ultra-attacking fullbacks. Catching Real Madrid on the break seems to be the only way in which Liverpool could pose a threat to Europe’s premier club.