Months before the World Cup kicks off in Brazil this summer, Rio will be hosting a tournament of somewhat different dimensions: the Street Child World Cup. It starts on March 28th and, as recently as six months ago, many of its competitors were children still living on the streets from some of the poorest parts of the globe.

Team Liberia is one of the 19 national sides taking part. For its players there is more at stake than world fame and huge fortunes. It represents the chance to bring their own issues to a global stage.

The World Cup epitomises football’s global brand. With an audience of more than half the globe, the most famous competition in the world is worth billions in commercial revenue. The Street Child World Cup, in contrast, represents another side to football. This tournament is not so much about glory and prestige, but social change. The tournament’s purpose is to raise awareness of the plight of disadvantaged children across the globe and provide street children with the opportunity to say “I am somebody” and prove that fact to the world. 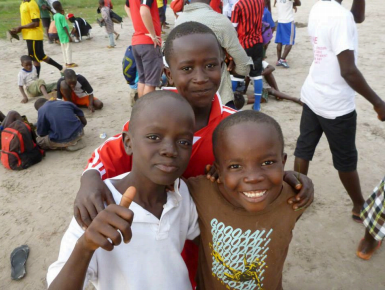 This story starts in Westpoint, one of the poorest slums in Liberia, a country where 85% of the population continue to live below the international poverty line. The recent upheaval of two civil wars has left Liberia’s infrastructure severely damaged. Many families have missing parents or parents who are unable to earn enough money to care for their children adequately. The result is an extremely high number of children living on the street, without shelter, care or education. Life for them is extremely dangerous, with some children becoming victims of serious abuse and others following paths into drugs, crime and prostitution.

Street Child, a UK-based charity committed to taking children off the street and getting them back into education, has recently started operating in Liberia to tackle this serious problem and has been selected to enter a team of ex-street children into the Street Child World Cup. Street Child saw this as an opportunity both to connect with the street children of Liberia and to highlight the gravity of the local situation.

Team Liberia coach Mohammed leads weekly training sessions in the very same slum where he grew up as a street child during the war, earning the nickname ‘Gaddafi’. He now tries to prevent children falling into a life of crime and despair by running football sessions as a way of reaching out to the street children of Monrovia.

In most cases these children have no figures of authority to guide them, and so the football sessions that Mohammed leads are often the only point of contact these disadvantaged children have with an adult who wants to help them improve their lives. Mohammed acts as a crucial link between street children and social workers through the medium of football. His work helps Street Child of Liberia build up a relationship within the community, with the eventual goal of reuniting these children with their families and enrolling them in full-time education.

John Asmah, Team Liberia’s 14-year-old striker, was just 7 when his father, a rebel in the Liberian civil war, abandoned him. John’s mother was left in extreme poverty and struggled to keep the family going. She could not afford to send her children to school. Instead, they were forced to go and earn a living on the streets to feed the family. Growing up without adequate food or education, John decided to leave home at the age of 12 to live on the streets. He joined a gang of street children, who would often get badly abused by older street children. These children received little sympathy from members of the public, who saw them as thieves and criminals. Fortunately, John heard about the Street Child football sessions in West Point and started to attend regularly. It was here that he started talking to a Street Child social worker, who offered him the chance to have a normal childhood. Street Child now funds John’s education and is working with his mother to create a sustainable livelihood that will support the whole family.

Now, like the other members of Team Liberia, John has been selected to play in the Street Child World Cup, not only for his football skills, but for his maturity and commitment to change. Before, during and after the tournament, each team member will act as an ambassador for Street Child, encouraging their peers to move away from a life on the streets and regain the rights to education and shelter that every child should have. 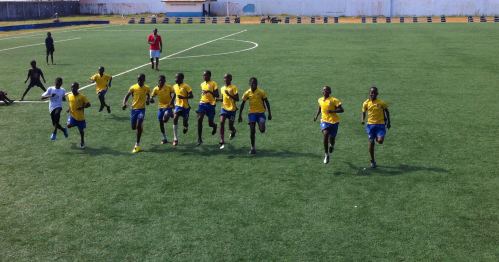 With the start of the Street Child World Cup just around the corner, the nine boys of Team Liberia, who were all dependant upon the street as little as six months ago, have been training hard in anticipation of their first-ever trip abroad. Amidst the excitement and nervousness, there is a sense of responsibility. We sometimes talk about footballers coming of age at major tournaments, but never before has this phrase been more applicable.

The government has pledged to double all donations from the public that Street Child receives in support of its Every Child in School appeal so there’s never been a better time to help children like John and his Team Liberia team-mates. If you’d like to learn more on how you can help ensure that children in some of the poorest countries in the world are given the chance to go to school and find a more positive life away from the streets, visit http://www.street-child.co.uk/